Problem: Many critics insist that Genesis 2 must have been written by someone different from the one who wrote Genesis 1, since Genesis 2 uses a different name for God. However, conservative scholars have always insisted that Moses composed Genesis, as indeed both Jewish and Christian scholars have down through the centuries. Indeed, the first five books of the OT are called “the Books of Moses” (2 Chron. 25:4) or “Law of Moses” (Luke 24:44) by both OT and NT writers.

Solution: Moses did write the first five books of the OT (see comments on Ex. 24:4). The use of a different term for God in the second chapter of Genesis does not prove there was a different author; it simply shows that the same author had a different purpose (see comments on Gen. 2:19). In chapter 1, God is the Creator, whereas in chapter 2 He is the Communicator. First, man is seen in his relation to the Creator (hence, the use of “God” or elohim, the mighty one). Next, God is seen as the Covenant-maker, thus, the use of “Lord God,” the One who makes covenants with man. Different names are used of God since they designate a different aspect of His dealings with man (see Gen. 15:1; Ex. 6:3).

Verse: Also he made a molten sea of ten cubits from brim to brim, round in compass, and five cubits the height thereof; and a line of thirty cubits did compass it round about. Should not have been 30 cubits around should be 31.4  around

END_OF_DOCUMENT_TOKEN_TO_BE_REPLACED

Problem: The Bible says that God created the world in six days (Ex. 20:11). But modern science declares that it took billions of years. Both cannot be true.

Solution: There are basically two ways to reconcile this difficulty.

First, some scholars argue that modern science is wrong. They insist that the universe is only thousands of years old and that God created everything in six literal 24-hour days (=144 hours). In favor of this view they offer the following:

Problem: Many modern scholars consider the first chapters of Genesis to be myth, not history. But the Bible seems to present Adam and Eve as literal people, who had real children from whom the rest of the human race came (cf. Gen. 5:1ff).

Solution: There is good evidence to believe that Adam and Eve were real persons. First, Genesis 1–2 presents them as actual persons and even narrates the important events in their lives (=history). Second, they gave birth to literal children who did the same (Gen. 4:1, 25; 5:1ff). Third, the same phrase (“this is the history of”), used to record later history in Genesis (6:9; 9:12; 10:1, 32; 11:10, 27; 17:7, 9), is used of Adam and Eve (Gen. 5:1). Fourth, later OT chronologies place Adam at the top of the list (1 Chron. 1:1). Fifth, the NT places Adam at the beginning of Jesus’ literal ancestors (Luke 3:38). Sixth, Jesus referred to Adam and Eve as the first literal “male and female,” making their physical union the basis of marriage (Matt. 19:4). Seventh, Romans declares that literal death was brought into the world by a literal “Adam” (Rom. 5:14). Eighth, the comparison of Adam (the “first Adam”) with Christ (the “last Adam”) in 1 Corinthians 15:45 manifests that Adam was understood as a literal, historical person. Ninth, Paul’s declaration that “Adam was formed first, then Eve” (1 Tim. 2:13–14) reveals that he speaks of a real person. Tenth, logically there had to be a first real set of human beings, male and female, or else the race would have had no way to begin. The Bible calls this literal couple “Adam and Eve,” and there is no reason to doubt their real existence.

Problem: Orthodox Christian and Jewish scholars maintain that God is one. In fact, the historic confession of the faith of Israel is taken from Deuteronomy 6:4 which says, “Hear, O Israel: The Lord our God, the Lord is One!” However, if God is one, why does this verse in Genesis use the word “Us”?

Solution: There have been several explanations offered throughout history. Some commentators have claimed that this is merely a case where God is addressing the angels. But this is unlikely since in verse 26 God says, “Let Us make man in Our image” while verse 27 makes it clear that “God created man in His own image; in the image of God” and not in the image of the angels.

Others have claimed that the plural pronoun refers to the Trinity. It is clear from the NT (e.g., John 1:1) that the Son was involved in the creation of the heavens and the earth. Also, Genesis 1:2 indicates that the Holy Spirit was equally involved in the creation process. However, students of Hebrew grammar point out that the plural pronoun “us” is simply required by the plural Hebrew noun elohim which is translated “God” (“Then God [elohim, plural] said, `Let Us [plural] make man in Our [plural] image’ ”). Consequently, they claim that this statement should not be used to prove the doctrine of the Trinity. Indeed, the Quran, which denies more than one person in God, uses “us” of God, demonstrating that the Near Eastern usage of “us” does not necessarily mean more than one person.

Still others have asserted that the plural is used as a figure of speech called a majestic plural. In this use, God is speaking to Himself in such a manner as to indicate that all of His majestic power and wisdom were involved in the creation of man. As has been noted, the plural pronoun “Us” corresponds to the plural Hebrew word elohim which is translated God. The fact that the name “God” is plural in Hebrew does not indicate that there is more than one God, or that this is actually a reference to God being a group of extraterrestrial astronauts. There are a great number of passages in the NT that refer to God with the singular Greek noun theos, which is also translated “God” (Mark 13:19; John 1:1; Eph. 3:9; etc.). The plural nature of the Hebrew word is designed to give a fuller, more majestic sense to God’s name. It should be noted, however, that the NT clearly teaches that God is a Trinity (Matt. 3:16–17; 2 Cor. 13:14; 1 Peter 1:2) and, although the doctrine of the Trinity is not fully developed in the OT, it is foreshadowed by many passages (cf. Ps. 110:1; Isa. 63:7, 9–10; Prov 30:4)

On Day 6 after God created man, He put that man in the Garden. In the garden He also created trees good for food. Then He made one more of each animal out of the ground for Adam to name and for Adam to find a helpmate. God then caused Adam to go to sleep so he could make that helpmate (Eve). All of this happened on Day 6.

Problem: The sun was not created until the fourth day, yet there was light on the first day (1:3).

Solution: The sun is not the only source of light in the universe. Further, the sun may have existed from the first day, but only appeared or became visible (as the mist cleared) on the fourth day. We see light on a cloudy day, even when we can’t see the sun.

Problem: Traditional Christian scholarship has maintained that the first five books of the Bible were written by Moses. The first two chapters of the Book of Genesis read as an eyewitness account of the events of creation. However, how could Moses, or any man for that matter, write these chapters as if he were an eyewitness since he would not have existed at the time?

Solution: Of course, there was an eyewitness of creation—God, the Creator. These chapters are obviously a record of creation which God specifically reported to Moses by way of special revelation. The tendency to ask questions like, “How did the chronicler know that minerals preceded plants and plants preceded animals?” betrays an antisupernatural bias and a refusal to consider alternative explanations other than those proposed by naturalistic science.

Problem: According to the First Law of Thermodynamics, “Energy can neither be created nor destroyed.” If this is so, then the universe must be eternal, since it is made of indestructible energy. However, the Bible indicates that the universe had a “beginning” and did not exist before God “created” it (Gen. 1:1). Is this not a contradiction between the Bible and science?

Solution: There is a conflict of opinion here, but no real factual contradiction. The factual evidence indicates that the universe is not eternal, but that it did have a beginning just as the Bible says. Several observations are relevant here.

First of all, the First Law of Thermodynamics is often misstated to the effect that energy “cannot be created.” However, science is based on observation, and statements such as “can” or “cannot” are not based on observation, but are dogmatic pronouncements. The First Law should be stated like this: “[So far as we can observe] the amount of actual energy in the universe remains constant.” That is, as far as we know, the actual amount of energy in the universe is not decreasing or increasing. Stated this way, the First Law makes no pronouncement whatsoever about where energy came from, or how long it has been here. Thus, it does not contradict the Genesis declaration that God created the universe. 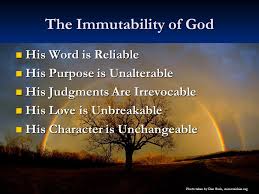 The Attributes of God By A.W. Pink

God is distinguished from His creatures.

IMMUTABILITY IS one of the divine perfections which is not sufficiently pondered. It is one of the excellencies of the Creator