Solution: In 1 Chronicles 3:16–19 we find the following genealogy. 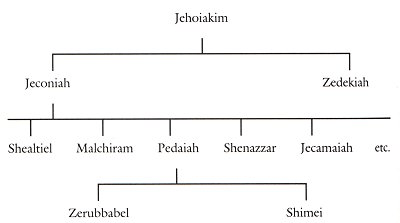 This record shows that Zerubbabel was the son of Pedaiah and the nephew of Shealtiel, Pedaiah’s older brother. Although the Bible does not record the death of Pedaiah, it is reasonable to assume that he died shortly after Shimei was born, and Shealtiel, the oldest of the sons of Jeconiah, adopted Zerubbabel as his own son.