Why are the lists of disciples different? There are four lists of the disciples found in the Bible. They sometimes differ in order, but this is not a problem since listing people in a different order still demonstrates that the people were the same. Matthew, Mark, and Luke, each contains a list of 12 disciples. However, Acts contains only 11. This is because Judas Iscariot, who had betrayed Christ, had died and was not listed. Acts 1:21-26 tells how they replaced Judas with Matthias thus retaining 12 disciples.

As you can see from the chart below, the disciples are listed according to each section of Scripture. The difference in content occurs with Thaddaeus and Judas the son of James. The most logical explanation is that both names describe the same person. After all, Judas the son of James would have been sharing the name of Judas Iscariot, the betrayer of Christ. It’s highly probable that he preferred to be called Thaddeus.

It is common in Scripture to demonstrate people’s alternate names. Take for example Acts 1:23 where we see that someone named Joseph is also called Barsabbas and Justus. 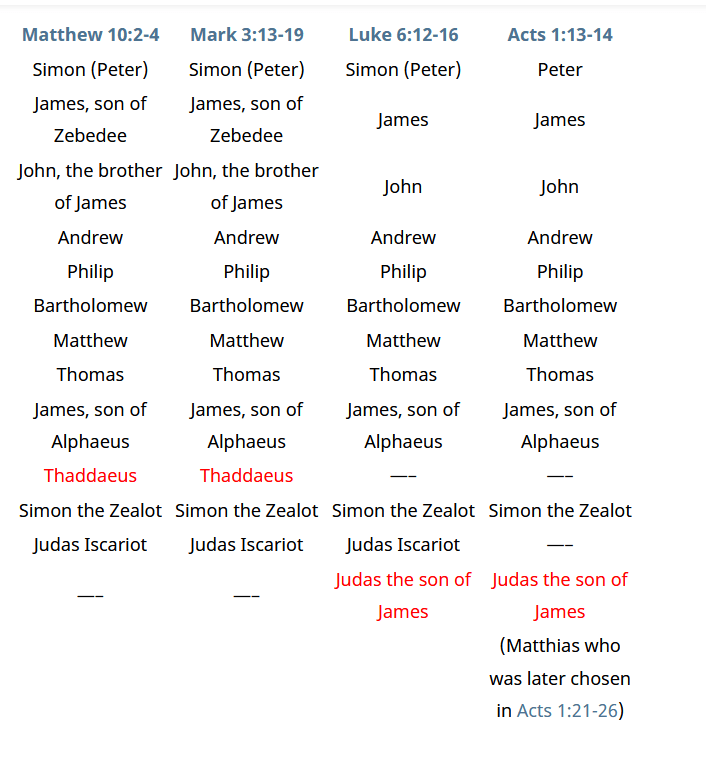 “And it came to pass in those days, that he went out into a mountain to pray, and continued all night in prayer to God. And when it was day, he called unto him his disciples: and of them he chose twelve, whom also he named apostles; Simon, (whom he also named Peter,) and Andrew his brother, James and John, Philip and Bartholomew, Matthew and Thomas, James the son of Alphaeus, and Simon called Zelotes, And Judas the brother of James, and Judas Iscariot, which also was the traitor. (Luke 6:12-16)

View all posts by petra1000